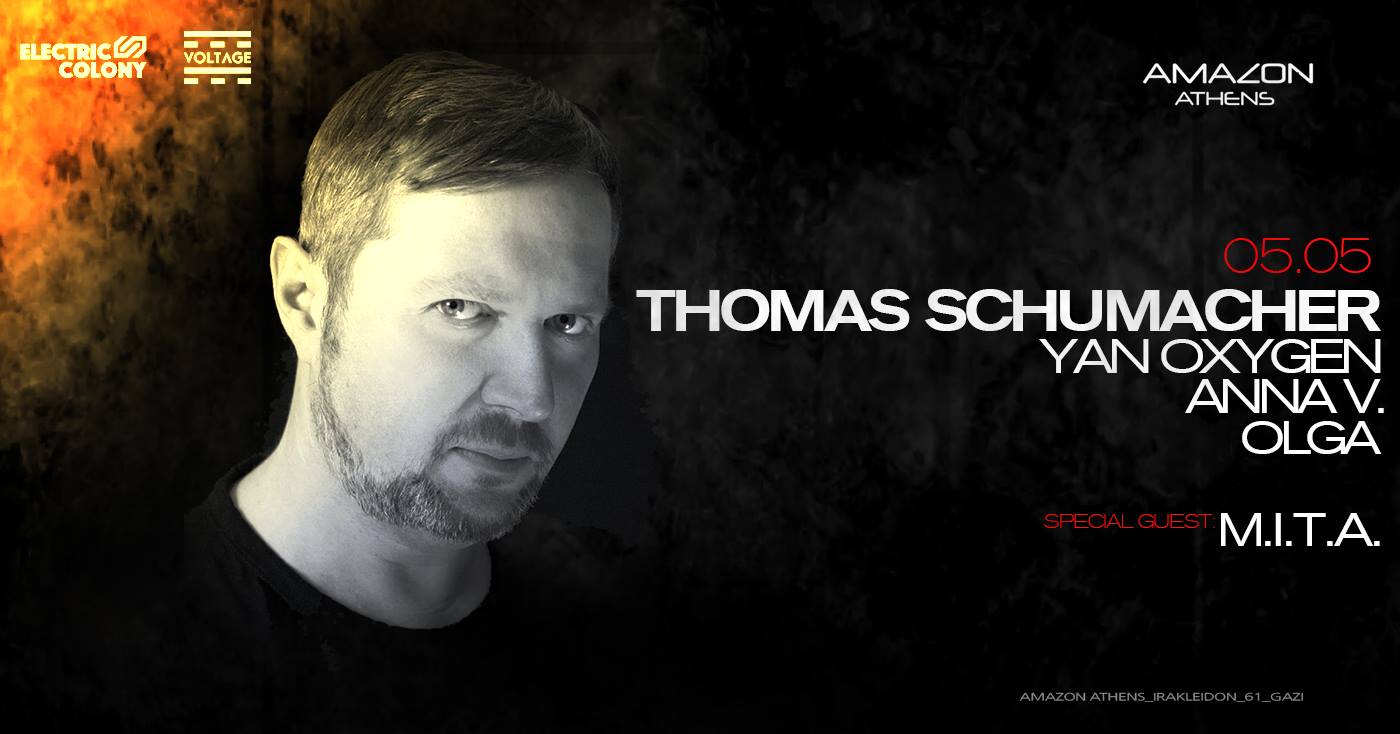 Thomas Schumacher was eleven years old when Depeche Mode released Construction Time Again. "I'll never forget sitting at home, listening to the album in my headphones, trying to figure out how they made those sounds."
Thirty-four years later, Thomas Schumacher still burns with curiosity. The Berlin-based DJ and producer makes light of his status as one of the most enduring, versatile artists in electronic music. "What I love about Techno is that it demands that you question yourself, reinvent yourself."
Thomas Schumacher is always pushing his own boundaries. "The art of being relevant," he says, "is to forget what you know.” In his early days as an artist, he had to learn how to physically create the sounds he heard in his head. Now, as a virtuoso, the challenge is to use his breadth and depth of musical knowledge to convey profound emotion. "Techno is not just a tool to make people dance," he says. "It is a very personal, intimate way of expressing myself."
This intimacy fuels the unique vibe of a Thomas Schumacher DJ set. He compares himself to the captain of a ship. “I purposely steer my sets into rough waters. I want to help people get out of their heads and into their bodies. I create a safe space for people to lose their minds, in the best possible way. They know they don't need to worry or be afraid, because I’ve got them. I know what I'm doing. They can let go and just be."
When not guiding clubbers through seas of sound, Schumacher reaches them via his productions on his label Electric Ballroom, and his weekly NOW podcast. NOW is a showcase for his low-key charm and impeccable ear for a great tune. And, like his DJ sets, the podcast is a forum for his studio output including the recent Natural Rhythm EPs on Noir.
The more you do, the more there is to explore, the more opportunities to invent, connect, and imagine. "I am always the one to change it up," Thomas Schumacher grins. "My ongoing ambition is to connect to the crowd, year after year. It's what lights me up."
His latest release, Natural Rhythm III on Noir Music, lit up the Beatport Techno chart, going straight to Number 1. Its highlight is "Stella", a propulsive anthem dedicated to his daughter. He sees no reason to compartmentalise his music and life. Everything is connected, everything is authentic. "There is no other version of me," he says. "When you meet me, you meet Thomas Schumacher."

Yan Oxygen
Hailing from Ukraine, Yan Oxygen is no stranger to the charts and set lists of some of the most notable DJ’s in the world. He has made a name for himself as an up-and- coming techno producer, releasing music and signing to record labels since the age of 22. Now as a household name, Yan’s production has brought him releases on notable techno imprints such as Respekt Records, Unity Records, Funk’n Deep, Phobiq, and many others, Yan shows no pace of slowing down anytime soon. Yan has certainly been a name to watch in the past and is certainly a producer catching the ears of his listeners with each beat that he assembles.

M.I.T.A.
Mattia Borriello, better known as M.I.T.A., born in ’90, started his career at the age of 14.
During years he improved his skills in studio and he decided to spend a couple of hours more in his studio working on his first tracks.
Still young, M.I.T.A. released an ep on Phobiq, neapolitan label born from techno master Sasha Carassi.
From that point everything changed: in 2010 the young producer made a remix for “Polychromatic” and, after a while, he received remixes from worlwide known artists such as Audio Injection, Paul Mac and The Advent & Industryalizer just to name a few.
2014 is an awesome year: “Level Down” ep born in collaboration with techno guru The Advent, appeared on Mixmag magazine as top release of the month (December).
Friendship with Cisco becomes stronger so both djs decided to come back in studio together.
In 2015 M.I.T.A. assigned track to labels such as Elevate and Analytic Trail and he started a really nice collaboration with Lucas Freire, better known as Dj Lukas in the hard-techno scene.
His works didn’t pass unnoticed and his tracks were played by Tim Xavier, Dj Emerson, Alan Fitzpatrick, Pig&Dan, Tomy DeClerque, Sian and Gary Beck to name a few.

ANNA V.
Owner of Voltage Records, Anna's lifetime purpose was obvious from a very young age. Music dominated her life since she started studying as a child, getting her through 2 decades of hard work in music schools to reach the standard she set for her self.

Sleeping next to her Kurzweil piano for countless nights, Anna focused on composing music regardless of the genre. For the last 10 years she has worked"behind the scenes" producing music for genres varying from Triphop to Techno, when she finally made the decision to create her own solo project in the year 2012, serving her life long love: Techno.

With obvious influences from Pig&Dan’s oldschool scents, Marco Bailey's punchy vibes and Tom Hades' relentless groove, her music is spontaneous and intense, but the more experienced listener will spot a pinch of spicy Acid House of the 90’s - music that was playing 24/7 inside her home as she grew up.

Anna’s music is definitely characteristic in sound, “not for everybody” as she says, as it represents her lifelong experiences, forged inside her mentality by her biggest musical influence: her father.

Apart from managing her own rapidly growing imprint, VOLTAGE Records, Anna has been releasing her music through important labels of the underground scene, like Pig&Dan’s ELEVATE, Alberto Ruiz’s Stick Recordings, RESPEKT, Funk’n Deep, Reload Black Records, London based Familia Records, Renesanz and many many more.

Olga GR
Olga aka Olga Fragou is a Greek Dj from Athens and a resident DJ of Electric Colony.

She is considered one of the best upcoming DJ’s in the Greek area, which can be seen― we might better say heard― from her groovy-melodic and full of dynamism sets.