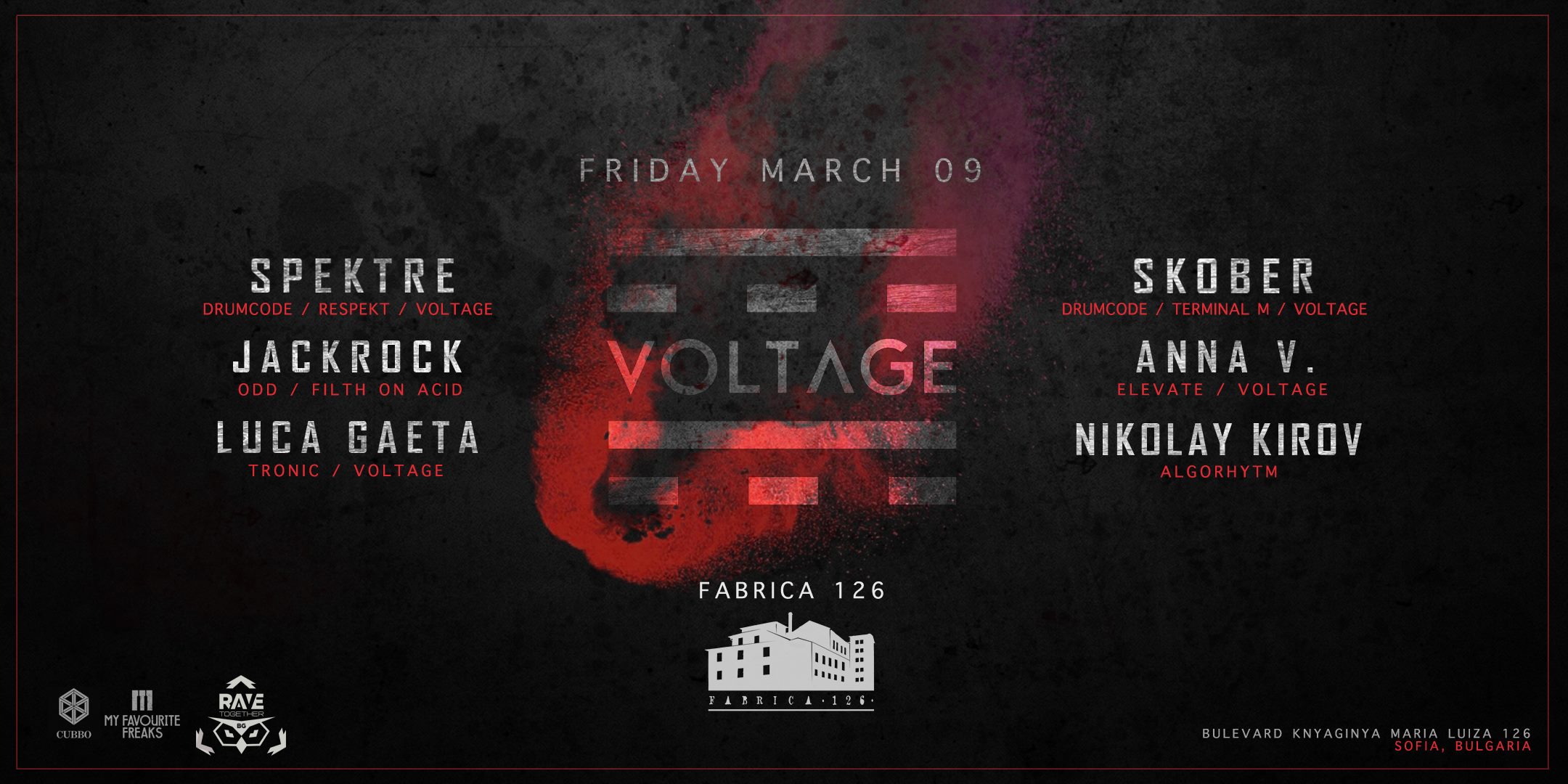 Sofia, get ready for a pure techno night!

After the success of VOLTAGE with Pig&Dan in Athens and VOLTAGE with Tom Hades and M.I.T.A. in Amsterdam, we’re thrilled to announce that we’re continuing our series of international events!

Event supported by: @Rave Together


Spektre
After beginning life as an experimental side-project for members Paul Maddox and Rich Wakley, Spektre find themselves over a decade later as established and respected features of the Techno landscape.
As a production outfit, they have recently released on such imprints as Elevate, Phobiq and Unrilis, as well as their own Respekt Recordings (now approaching it’s 150th release) to the acclaim of their peers, with the likes of Adam Beyer, Carl Cox and Alan Fitzpatrick among their plaudits. As their near-permanent presence in the Techno download charts confirms, the quality and consistency of Spektre’s studio output is a given.
As performers, Spektre’s unique sound has taken them to some of the biggest and most highly regarded venues worldwide, with frequent bookings by the likes of Space Ibiza, Exit Festival, Pacha Buenos Aires and Burning Man. On stage, their long-standing chemistry and constant desire to experiment always results in an exciting spectacle. Their live exploits are also documented alongside guest slots from esteemed cohorts in a fortnightly Mutual Respekt Podcast, which is syndicated across the globe.

Skober
Skober is a Ukrainian techno DJ and producer with his unique deep-techno style. Having good music background and experience playing in rock band in his early youth it is no surprise that after being infected by House vibes this young man jumped on the right wagon.
Skober has done lots of tracks and remixes for labels like Drumcode, Phobiq, Analytictrail, Respekt, Trapez, Fone Audio, Remain, Rhythm Converted, Spark Musik, Code, Organism. There were numerous entries in techno and minimal tops on different music shops all over the world done by Skober's music and he got support from some serious players in this industry.
He is supported by such famous artists as Adam Beyer, Alan Fitzpatrick, Joseph Capriati, Slam, Dubfire, Sasha Carassi, Markantonio, Luigi Madonna, Harvey McKay, Mark Reeve, Spektre, Tom Hades, Axel Karakasis, Steve Parker Loco & Jam, Mr. Bizz, RedHead and many others. But he is not running over the quantity of tracks as his main point is quality and ideas. So watch out and support!

JackRock
JackRock’s music comes straight from the heart of Bulgaria – Sofia City. Born Hristo Ivanov, JackRock began his career in 1996 during the “dark ages” of the Bulgarian techno scene. He has since become one of the most popular and respected DJs in the country.JackRock has performed in numerous clubs and venues all over Europe as well as Egypt. His sound is stylistically diverse and charged with electrifying energy that creates rocking explosions on dance floors. For the last thirteen years, JackRock has frequently teamed up with another big name on the electronic scene, DJ Balthazar. In 2006, they produced and released their collaborative debut record “Rockin’ Dancefloor”, which includes remixes of songs from Eric Sneo and Cave. The EP reached 1 on the Musicmail Distribution charts and made its way into the sets of renowned DJs Carl Cox, Marco Nastic,Dylan Drazen, Pedro Delgado, Marco Lenzi, and Ortin Cam. Their second release “Moonshine” included a collaboration with Kobbe, a fellow DJ and American producer. “Moonshine” was an instant success and immediately appeared in the live playlists of Sander van Doorn, Carl Cox, Marcel Woods, and many others. Marcel Woods even took the initiative to personally introduce the single on Judge Jules’ show on BBC Radio 1. JackRock and Balthazar started Renesanz - an agency for electronic dance music. In the short time since their inception, the Renesanz dance parties have grown immensely popular and have become a national trademark for Bulgarian dance culture.


ANNA V.
Owner of VOLTAGE Records, Anna's lifetime purpose was obvious from a very young age. Music dominated her life since she started studying as a child, getting her through 2 decades of hard work in music schools to reach the standard she set for her self.

Sleeping next to her Kurzweil piano for countless nights, Anna focused on composing music regardless of the genre. For the last 10 years she has worked"behind the scenes" producing music for genres varying from Triphop to Techno, when she finally made the decision to create her own solo project in the year 2012, serving her life long love: Techno.
With obvious influences from Pig&Dan’s oldschool scents, Marco Bailey's punchy vibes and Tom Hades' relentless groove, her music is spontaneous and intense, but the more experienced listener will spot a pinch of spicy Acid House of the 90’s - music that was playing 24/7 inside her home as she grew up.
Anna’s music is definitely characteristic in sound, “not for everybody” as she says, as it represents her lifelong experiences, forged inside her mentality by her biggest musical influence: her father.
Apart from managing her own rapidly growing imprint, VOLTAGE Records, Anna has been releasing her music through important labels of the underground scene, like Pig&Dan’s ELEVATE, Alberto Ruiz’s Stick Recordings, RESPEKT, Funk’n Deep, Reload Black Records, London based Familia Records, Renesanz, Unusual and many many more.

Luca Gaeta
Luca Gaeta is a DJ and a constantly evolving producer, always looking for innovative sound. Eclectic, creative, with a unique style that transmits great strength and adrenaline.
His composes his music with a careful selection of classical house sounds.
His productions have been released by important labels such as Tronic,Organism, Toolroom, Agile, Night Light, Selected, Florida, and his latest collaboration with Skober is definitely worth mentioning.
Luca's album 'Line' on Respekt Recordings has brought him the biggest success; it was picked and played by some of world's biggest names such as Adam Bayer, Jay Lumen, Mark Reeve and more

Nikolay Kirov
Hailing from Sofia, Nikolay Kirov is an emerging artist out of the hot Bulgarian techno scene.

Passionate about techno, young and promising, he has every ingredient necessary to go further up in his career.
Just a year after his kickstart in Techno, Nikolay Kirov is building up a solid name for himself shiftily and steadily.

Shared the DJ booth with various "heavy" names of the industry and played in clubs in Amsterdam, Austria,Italy and Athens, not forgetting to mention his appearance during ADE 2017, his sets are dynamic and punchy, fast but not speedy, and through his good technique and excellent music taste he is setting the floor on fire on every appearance!